Knobbled and rugged, the Freycinet Peninsula juts out into the southern ocean connected by a thin strip of land to the eastern coast of Tasmania. A line of prominent rocky hills sticks out of the sea in a knuckled ribbon, ruffled by scrubby forest, with wave-swept headlands broken by sweeping white-sand bays. It is unsettled, accessible only by foot or boat, and is a true natural wonder of Australian geography.

The jumping-off point for Freycinet is the village of Coles Bay, a scattering of holiday homes and tourist accomodation set over half a dozen little bays and inlets giving a beautiful aspect onto the peninsula itself. The town exists for its access to the walking trails and the national park- I assure you there’s little else to do there- and lodging is best booked in advance, as it is in short supply compared to the large numbers of people who visit. Even mid-week after schools were back we were lucky to get the last caravan at the holiday park.

We arrived in Coles Bay when the sky was brooding and rain showers brushed through intermittently. We stopped at a cove which gave aspect over the line of hills that makes up the Peninsula itself, just the other side of the choppy green water. The one thing Coles Bay has for it other than proximity to some of Tasmania’s prettiest beaches is the view, which is truly magnificent and can’t be overstated. I don’t imagine it ever gets old waking up and looking at those rugged peaks across the bay.

The changing light made for interesting if challenging photography that first day. When the sun lit the foreground, the contrast between the orange-painted rocks and the heavily overcast sky was striking, and the peninsula itself made for a dramatic backdrop. It was a fun shoot. 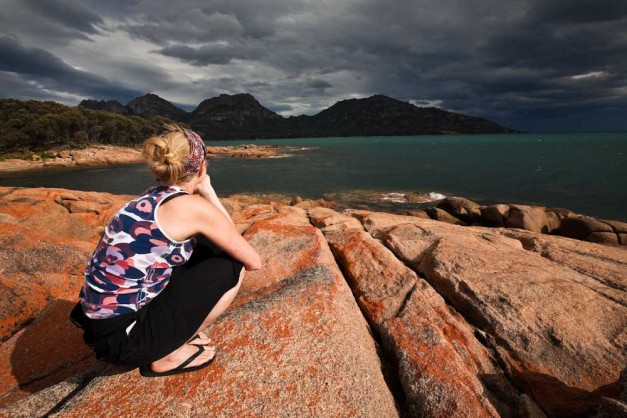 The next day, after completing our walk into the exquisite Wineglass Bay (more to come), we returned to the same little cove. The weather had improved and now we had blue skies but a choppy sea. The scene remained dramatic- as did the light- and it was another enjoyable landscape-fest.

Any visitors to Tasmania would do well to include Freycinet on their itinerary if they have any interest in scenery, beaches or the sea. I for one will surely be heading back there on my next trip through.