Shadows in the Headlights 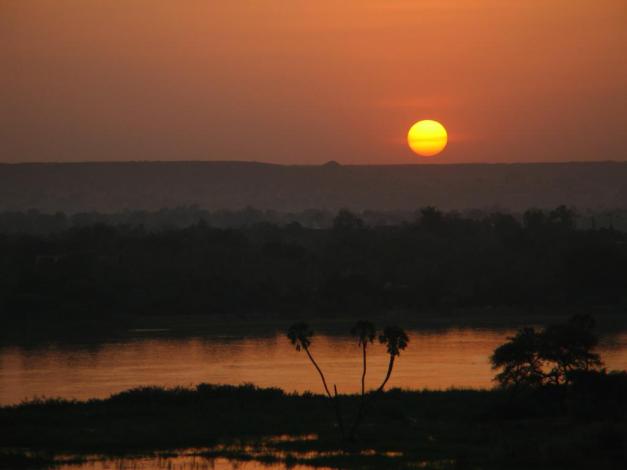 My time in Niamey was by parts exotic and dark. I came under tremendous pressure at work and, being young, struggled to deal with it well. My temper grew short, I overworked, lost my appetite, slept badly, and started over-exercising in an effort to manage my stress. In short, I toyed with the pointy end of burn-out.

Driving has always been a form of escape for me. I like the physical act of being behind the wheel. I suppose if I unpack it it’s some combination of being in control of my surroundings, of being in a private space, and of moving or travelling (the last being something I will probably touch on elsewhere).

I had access to two vehicles while in Niamey, and I was fond of both of them. One was the car which was assigned to our teamhouse, an old Toyota Tercel, an All Wheel Drive hatch which I loved despite it being in fairly rough condition. In fact, as a car ideally suited to the city streets of Niger’s capital, most of which were sand and rutted dirt. We even took it off-road occasionally, for example on afternoons when we might head up to the Plateau overlooking the Niger River for a little scramble on the rocks or an early-evening barbecue. The other was a Toyota Land Cruiser Prado, brand new and purchased specifically for the emergency program which I found myself managing at the time. Although it captured what makes me uncomfortable about big NGOs sometimes (we could have found a cheaper vehicle with a little effort) it was a wonderful machine- and it could certainly reach all our remote project sites, scattered as they were over a thousand kilometres of Nigerien bushland. I tended not to drive it in Niamey, partly because I felt it was ostentatious when the decrepit little Tercel did the job just fine, and partly because it was a field vehicle, and more often than not would be with one of our nutrition teams doing follow-up visits in the districts.

The last few months in Niger were, emotionally speaking, the hardest for me, and I often found myself in dark moods come nightfall. I had a network of friends who were a real blessing to me, but I still found my emotions hard to manage. I was often out several nights a week (Niamey’s small, intimate social scene is something I still miss at times), and so frequently found myself behind the wheel of one car or the other. Sometimes I was driving home from a friend’s place, from our small-group meeting at the Sahel Academy, or from one of the restaurants in the town centre. Sometimes I was on a deliberate detour, just needing to drive.

Niamey’s road network was made up of just a handful of sealed roads, off which ran countless streets and avenues, all unsealed and therefore largely consisting of soft sand and rutted dirt. In some quarters they were a maze of narrow residential grids, fronted by orange-stone walls overflowing with bougainvillea. In others they were like country trails leading off into neighbourhoods unknown, broken and humped, lined by shacks. In some places the roads themselves were just vehicle tracks through open terrain surrounded by landmarks. In a few, they were large wide expanses of sand that marked some city planning boundary on a map, but translated into vague undefined wastelands of red-brown sand between residential blocks.

Driving was fun. In the Tercel it was a matter of keeping up the revs and making sure the car didn’t bog in the deep stuff, sliding on corners- sometimes deliberately, sometimes not. In the Prado it was letting the soft suspension glide us over bumps and ruts and listening to the powerful motor purr as we ate up the desert grid. While in the Prado we might have the air-conditioning on, the Tercel had no such luxury, and even on days when the mercury topped fifty degees centigrade (and it did periodically during the hot season), we had the windows cranked open and air like a blast-furnace washing over our upper bodies. Woe betide us if we didn’t find a patch of shade in which to park the car.

Niamey, despite having a population of nearly a million people, felt like a sprawling village. A half-dozen ochre high-rises were scattered thinly about a rough quadrangle that formed something of a city-centre, although these dated back to a brief commodities boom in the mid-70s and hadn’t seen much love since then. Otherwise the place was made of low-key villas with tiled entranceways, and adobe mud-brick homes that slowly wore down with the seasons, a slow-motion version of sand-castles at the end of a sunny day at the beach as the tide is coming in. The roads were narrow and therefore congested despite the low volumes of commuters, but they obeyed simple rules that, once mastered, kept things flowing. Simply-put, Might is Right- something that the Prado played to beautifully.

There were no street-lights to speak of in Niamey. In a city in one of the world’s poorest nations, there were higher priorities than fixing up a network of streetlamps. Securing a steady supply of electricity and mains water should probably have been up there for starters. And being in the desert, the dust was a constant. During the cooler winter months, when the nightly temperatures would drop to a chilly 12 or 15 degrees C (it was always amusing to see the Nigeriens appear in winter coats when the morning temperature was already climbing into the high teens for a top of 30), the sinking air kept a pall of smoke trapped over the city. This was exacerbated in the lead-up to the Francophonie games (the French-speaking world’s answer to the Olympics) by a city-wide beautification scheme, whereby thousands of soldiers took to the streets collecting the prodigious heaps of rubbish that accumulated in every arrondissement and burning it- with the result that the air grew not just foul but positively acrid. Attempting to go for a run after work in the simmering evenings, colleagues and I would end up coughing with lungs seared by a smog that would bring tears to the eyes of even the most hardened LA commuter.

Oddly enough for a muslim country, Niamey was decked in fairy lights come Christmas and New Year’s (and shortly afterwards for Tabasky, or Eid-el-Adha, the Festival of Sacrifice that fell in the first week of January and commemorates the sparing of Ibrahim’s son Ishmael- Abraham’s Isaac in the Judeo-Christian tradition- through the miraculous provision of a ram; it is a bad week to be a sheep in Niger). I have a vivid memory of driving home one night from work after dark, past several shops all bedecked in small coloured globes and signs reading Bonne Annee, while a pall of smoke and dust hung thickly in the air, obscuring the sky and making approaching headlamps appear fuzzy and indistinct. It triggered a pang of nostalgia for me, as were it not for the muggy temperatures, the scene mirrored perfectly a winter’s fog on a cold December night in the lead-up to Christmas, and had me suddenly longing to be in France or England as the season grew near.

Herders were generally banned from driving their livestock through Niamey, although cattle and goats had to get across the Niger River somehow, and Niamey was one of the only fording spots. Sights of hundreds of cows being driven across the dusty river-bed during the depths of the dry season are still firmly imprinted on my mind. Perhaps the most exotic vision of those nocturnal excursions, however, were the camels. Again frowned upon during the day, at night-time men could lead their camels through the city, when traffic was lighter or policemen were in bed, I’m not sure which. It is an eerie sight indeed to sweep around the angle of a roundabout and find the elongated shadow of a camel stretched out against the hanging dust, or to see the swirling silhouette twisting in a set of oncoming headlamps. The image of a camel’s long legs and ungainly besaddled hump being led by its Tuareg handler through the city streets is one that never ceased to jolt me out of familiarity and remind me that I was living in a culture vastly different to my own.

The Prado had a CD player. On a recent trip out of Niger to Canada, I had watched the movie Black Hawk Down, an account of the Battle of Black Sea, where a group of US soldiers- mostly Rangers and Special Forces- were involved in a fierce firefight and greatly outnumbered by militia loyal to Somali warlord Aidid. (Incidentally, for those that can handle the intensity, both the movie and the book by the same title are superb, and if taken in with a critical eye are also thought-provoking and challenging accounts of modern warfare). I subsequently bought the soundtrack, a dramatic and often melancholic mix by one of my favourite composers, Hans Zimmer. It blends atmospheric North African vocals, melancholic strings, industrial beats and dramatic orchestras to produce a vibe that varies from intense and confronting to mournful and wistful, and accompanies the film beautifully in its sense of place and its expression of the wasteful tragedy of war.

I can remember on a few occasions putting this CD on an just driving. The soundtrack became a companion to my mood- dark, angry, often sombre and introspective- and also to the city itself, with its mud-brick walls, desert pathways and ochre minarets. At night, my world withdrew to the bubble of light created by my headlamps, and I would take the vehicle down roads, sometimes not knowing where I might end up, but just driving, feeling the tyres ride in the soft sand, sometimes yawing, sometimes juddering over ridges and potholes, listening to the strings, to the funereal voices, and to the quiet roar of the motor keeping my own silence company. And the shadows of the city would flicker past my high-beams: skinny dogs slinking reluctantly from my path; white smoke rising from a heap of glowing embers where a pile of rubbish had been smouldering since dusk; a group of turbaned men gathered drinking tea on little stools in front of a darkened shopfront; children in bare feet running, up long past their bed-time and kicking up puffs of sand as their heels strike the ground; a folorn donkey tethered beneath the branches of a thorn tree in front of an empty courtyard; women in colourful robes emptying a giant cauldron of a cooking-pot onto the street. The tattered remains of another day, slowly swallowed by the encroaching night as the city once more wound down, and I, restless, sought some escape from the crumbling walls that I saw hemming me in.