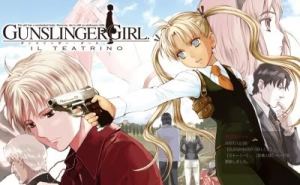 The girls of the Social Welfare Agency are back- innocent looking adolescent girls with cyborg bodies trained as highly skilled government assassins. In this second installment of the Gunslinger Girl concept, Triela, Henrietta, Rico and the rest find themselves pitted against a group of terrorists determined to destabilize the country, and a boy assassin named Pinnochio who may be a match for all of them. But are they really all that different in the end…?

I’m not ashamed to admit that, despite its corny-sounding title and apparently fetishist-oriented subject matter (the cover image of a prepubescent girl in school uniform toting a Sig-Sauer P239 semi-automatic should be enough to dissuade most rational viewers), the original series of Gunslinger Girl stands near the top of my all-time favourite shows. It’s an intelligent, honest and at times confronting story that eschews the potential for exploitative content, and instead presents a thought-provoking journey of blurred morals and rich character interactions.

I had high expectations of the sequel, until I learned that it was produced by a different mob, and on a much lower budget. Disappointing. So I re-oriented my hopes to a lower peg, and steeled myself for a let-down.

Ultimately, I was both disappointed and satisfied by the show, in a varying and often overlapping fashion.

First, a look at the artwork. This was far and away the biggest let-down. In fact, despite my mental preparation prior to watching, the first episode still had me wanting to flee my screen screaming. While the characters from the original show are back, they’ve been re-invented in a different style- dropping the gritty realism and slightly dark edge that the original show presented for something far… cuter. The girls have enormous eyes, the colours are bolder, the palette simplified and far more cartoony- in short, I felt I was watching a show targeted at an audience ten years younger.

Beyond that, the animation itself had taken a serious hit. The smooth, high-impact sequences of the original have been replaced by moving frames, action lines, still pans and some really quite shonky movement. The characters often feel a little awkward in their movement, and for a show to which the action scenes are a major contributor, this is quite unforgivable. Flashback sequences- which make for a significant chunk of airtime- are represented by a sepia wash and a roving black frame. It’s a cheap effect and is visually distracting and unecessary.

The scenery too has slipped. The sumptuous attention to detail in the first series- the painstaking reconstruction of classical Italian locations- has been replaced by much softer line-drawings of the same, when zoomed out to birds-eye views, feels positively childish. Perhaps the most frustrating aspect of the whole ordeal here was that the artists clearly wanted to let the viewer know that they’d based their artwork on real locations, so felt it necessary to put in datelines for every scene-jump, to let you know which part of tourist Italy you were looking at this time (a trait the original mercifully left to the intelligence of the viewer).

Perhaps the saddest part of the artwork debacle, however, is that the characters have lost their spark. Subtle expressions are no longer well captured, and the girls’ eyes- so important to communicate emotion beyond the script (see Figure 17 for a spectacular example)- are lifeless and flat. At times they look simply vacant, at times overly cute in a shallow sort of way, and at times they look downright sinister- altogether unsympathetic. While the story made an effort to blur the lines between good and bad, and aimed to portray the girls (erstwhile heroines) in a dark light, the blunt animation really made this a very unsubtle and condascending process for the viewer.

This lack of subtlety was an ongoing theme through the series. Key points were made clumsily and pointedly- in my opinion unecessarily. The first episode informs the viewer (who perhaps hasn’t seen the first series) that the girls of the fratellos have affection for their big brother handlers. However, unlike the beautiful nuance that the original series portrays over its length, Il Teatrino turns Henrietta’s feelings for Giuse into a schoolgirl’s crush, complete with blush lines and childish behaviour.

As the series continues, this fawning is repeated with all the subtlety of a Steyr AUG A2 through the windshield. Each time one of the girls executes some malfaisant mook, she looks up with big blinking puppy-dog eyes to her handler for approval- breaking into big happy smiles upon receipt. Not only does it lack any charm, it actually turns the girls into near-sociopaths. While I get that the story wanted to portray this tendency, it again ached for the smooth style of the first season. Among my favourite scenes in any anime show is Rico’s “I’m sorry” scene early in the original GSG series, which is a beautifully portrayed and chilling representation of this innocence overlaid with bloodlust- completely bulldozed in Il Teatrino.

The first casualty of this war is apparently nuance.

Disappointments aside, Il Teatrino wasn’t a complete washout. Stripping away the expectations and comparisons to what is in my opinion an awesome show, the second installment delivers a solid storyline, moderate amounts of suspense, some compelling sequences, some good action moments (although given the paucity in some aspects of the storyline, not enough of them), and a few sympathetic characters.

The driving theme is the blurring of lines between good and bad- showing the sinister little heroines of the first season in an even darker light while making the ‘terrorists’ altogether quite human and sympathetic, and really playing to their narrative almost as much as the girls’ own stories. While Pinnochio is the main focus for this storytelling- he is clumsily juxtaposed with Triela for a fairly predictable and run-of-the-mill crescendo- in fact the double-act of Franco and Franca, a pair of young idealogues-turned-fanatics who appeared briefly in the original series, is far more compelling, and Franca is probably the most fleshed-out and pleasant of the cast, in spite of her chosen profession. Here we find the story told with a little more subtlety, lacking elsewhere.

Among the girls, Henrietta is scaled significantly back from her leading role in the first season, while Triela comes to the fore, and a little of her story is fleshed out further. Claes gets an episode to herself which adds little to the series’ philosophy or momentum, and ditto for Angelica, who feels added in only to try and bring some closure to the beautifully poignant ending of the first season, and which therefore feels clumsy.

There are also a range of peripheral characters who seem to add little to the narrative. Beatrice, a new girl in the social welfare agency, gets a few seconds’ screen-time across the 13 episodes, and characters such as Pricilla, a young woman whose link to the agency is never satisfactorily explained and who also got a few moments’ time in the original show, pops up frequently and again seems to add little. It felt at times disjointed. I understand that the show is based around the manga series, but as a standalone piece of work (for those of us that don’t read the manga) it doesn’t really work as well.

The music is a mixed bag. The classical strains of the original series have been replaced by a mix of elevator music and truly awful tuneless electronic beats for the action sequences. It’s generally forgettable, but there are a couple of pretty and melancholic pieces, including the piano run which Pinnochio is so fond of. I actually dug the opening and closing themes as well- upbeat J-Pop which were pleasant bookends to the episodes.

Il Teatrino was, on the whole, a disappointment, but primarily because I loved the first season of Gunslinger Girl so much and originally had high hopes. To the uninitiated it runs as a fine series on its own, without having anything to set it apart from many others except, perhaps, the somewhat sinister concept of young girl assassins. The storytelling lacks finesse and the artwork is run-of-the-mill, and there’s little original here to excite, but the plot moves with a steady pace and there are some action sequences that do the trick, and it wasn’t a painful experience finishing the series off. It just wasn’t as good as it could have been with the setup it had.

Probably the highest accolade that I can pay Il Teatrino is that it inspired me to go back and re-watch the original series, which I enjoyed unreservedly and if anything appreciated more this time round.

Il Teatrino is definitely for maturer audiences. Unlike the guns-with-girls shows produced by Koichi Mashimo, there’s plenty of flying, pooling and soaking blood when good guys and bad guys alike cop some violence. Images of the girls covered in blood after a kill are commonplace. There’s death in most episodes, and while most of it isn’t nasty, the subtext- adolescent girls working as government assassins- is at best distasteful, and often deliberately disturbingly represented (Rico in particular has quite the nasty streak). The death of children is represented, and while there’s nothing actually shown, one episode deals with some very dark material related to child abuse. Really the title and cover image should say it all, but the show takes a very serious and humourless approach to death and, if the story had been told with a little more finesse, would be a very grim tale indeed.