(First published in Outdoor Exposure in 2006)

I always have mixed feelings leaving the parking-lot at the start to a backcountry trip. On the one hand, there is an element of excitement, of anticipation, and that sweet jangling of nerves that gets the heart beating just a bit faster in preparation for the exertion and excitement that’s on its way. On the other hand, there’s a touch of fear, because every trip has an element of the unknown. Unknown terrain, unknown conditions, and even on a trip that you’ve done forty times before, that unpredictability that is as inherent a part of mountains as the snow, ice and rock that makes up their physical form. And let’s face it, if it wasn’t for that, most of us would probably stay at home.

However, this trip I was more anxious than usual as we geared up. I was touring with my friend Mackie, and we had planned a three-day trip on the Wapta Icefields, in the heart of Yoho National Park. One of the most beautiful stretches of mountain scenery anywhere on the planet, I remember my first journey several years earlier along the main highway connecting Lake Louise and Golden, on a cloudless March day when the peaks and trees were coated with a fresh blanket of cold white snow. As I looked up from the shady valley floor to the towering peaks gleaming in the morning sunlight, I was moved almost to tears by the sheer wonder of creation. Now, on another March morning several years later, our short drive up the Icefields Parkway had done much to put me in the same mood, taking in the jagged ridgelines and towers of rock that line the highway north from the TransCanada. 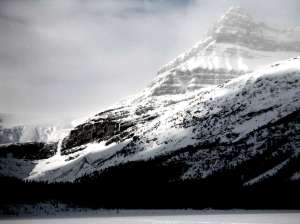 I was anxious for two reasons. The first was that Mackie had gone to great lengths to warn me that the climb from Bow Lake to the alpine hut where we would be staying was a challenging one, for stamina if not technique, and this was only my fourth day in eighteen months on skis, so I was not confident in my own fitness. The second had to do with my pack. Or rather, what was in it.

Between us, we were carrying our winter survival gear including down jackets and bags, avie equipment, ropes, harnesses, karabiners, cameras, and even walkie-talkies. We were also carrying an abundance of food supplies, the result of a previous trip we had taken together where we had skimped on food and ended up crawling back to the vehicles after two days in waist-deep snow, nearly weeping with exhaustion. I estimate that we were probably hauling in excess of sixty kilos of gear between the two of us. I’m not a big guy. I’m not small, either, but at 5’10 and around 165lbs, I’m definitely on the more compact end of the scale. Conversely, my buddy Mackie is 6 feet 4 inches of long, gangly legs and a well-toned form that spends a lot more time in the outdoors than I do.

And for the life of me I couldn’t work out why we were splitting the weight 50-50.

Once Mackie had helped me manouevre my pack into my shoulders and checked to make sure I could still stand, it was time to go. The first stretch of the journey involves the traverse of frozen Bow Lake, and from the parking-lot, it is a deceptive stage, for the hills look close, and being low to the ground, the distance across the lake itself is somehow compressed. We slogged on, occasionally buffetted by gusting winds whistling from between the peaks ahead that drifted in and out of view behind grey clouds. Having grown up being told not to play on frozen lakes incase it cracks beneath you, I found this pitch unnerving, all the more so when the occasional grumble or moan rose up from the ice itself. I remembered that I was weighing a lot more than I usually did, and I tried to keep my pace up.

From the end of the lake, the trail winds its way into a wide valley between peaks, and the sun had come out, so that we were quickly hot. We kept a reasonable pace winding our way through thin forest, climbing ancient morain banks and giving our calves a workout as we went, but I was only too aware that we weren’t really climbing. The trail, Mackie had warned me, was pretty long and flat all the way to the last half-mile, where almost all the altitude gain would be made. The knowledge that I had to conserve my energy for a final push didn’t fill me with glee, but it was a gorgeous day to be in the Rockies, and as we stopped for a brief photo op a little before lunch, there is a shot of me, sleeves rolled up and standing with a backdrop of snowy peaks and dramatic rock walls. I am smiling. Looking at the size of the pack on my back, I’m still not sure why.

The Mousetrap was our next hurdle. A flat-bottomed canyon carved out by a bubbling creek, it cuts its way between two steep-sided snow-loaded slopes, and is as perfect a terrain-trap as you’re ever likely to find. All season long, loose snow sluffs and slides into the Mousetrap, piling up in the canyon floor and creating navigation-hazards for the backcountry mountaineer. But our real concern was watching those slopes above for whatever else might chose to come down. There is only one rule heading into the Mousetrap: Get in, keep your head down, and get to the other end as quickly as possible.

Mackie had jacked a pair of walkie-talkies from his parents’ place before leaving, but true to his organizational style, the batteries were flat. We went in seperated by a couple of minutes’ distance, keeping eachother just in sight but far enough apart that should one of us end up being buried by snow sliding down from above, the other would ideally be able to dig them out in a hurry. We stuck to our strategy and piled through as fast as we were able. Although there had been no fresh snow for days, there was plenty of evidence of recent snow-slips piled on the canyon bed, and that warm afternoon sun was doing nothing to stabilize the snowpack. 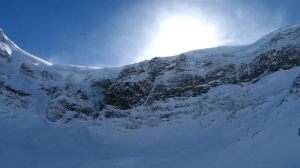 We were now two hours into our assault on Bow Hut, and had still not really climbed very much since leaving the parking lot at the lodge, a fact that was steadily wearing itself upon my resolve. But above the Mousetrap, we broke into one final bowl, an enourmous amphitheatre with a sheer backwall above which a glacier the size of a small city-block hung uncomfortably. I had never been there before, but it was a sight I was strangely familiar with. For many years, Tony Daffern’s Avalanche Safety has had a prominent place on my bookshelf. The cover shows a photograph of a wall of powder-snow, triggered by a falling serac, about to engulf a train of ski-mountaineers who are ant-like and miniscule in its path. It is a dramatic shot, one that is etched on the mind of anybody who has seen it. The bowl laid out before us was where the photo was taken. This, Mackie informs me casually, is another good place not to loiter.

We had reached the crux of the ascent. We scurried across the exposed flats beneath the icefall then launched ourselves up the final push. A short, steep slope about 35∞ in gradient was the final barrier to reaching the hut, and I was grateful that I had known to conserve my energy. We cut short interlocking kick-turns into the slope and encouraged our tired bodies up the last few hundred feet of altitude, until finally, there it was before us.

Bow Hut is categorically not the prettiest hut in the Rockies from the outside, but it must be one of the most comfortable once you’re in. A tin superstructure, it is infact two well-seperated living areas, a dorm and a kitchen, complete with stoves, outhouses and broad wooden bunks. It sits on a natural deck with views of the Vulture Glacier, Bow Lake and behind, the toe of the Wapta Icefields, enticing and luring a short distant away. If the three rules of real estate are location, location and location, then surely Bow Hut is a realtor’s dream.

And it was ours, too. We dumped our gear with gusto, and stopping only for a quick cup of noodle soup, we pressed on. It was late afternoon, and there were at least two hours of sunlight left to make use of. With lighter packs, some hot food, and a sense of accomplishment all urging us on, we made good time tracking up the wall behind the hut. To the right as we climbed sat the odd, round nubbin of rock known as the Onion. To our left, Mt. St. Nicholas dominated, a mitre of rock capped at just under ten thousand feet with a sheer cliff-wall overlooking our ascent, tapering away behind into a soft, untouched field of perfect powder snow. We paused and drooled over imaginary lines that would probably get us killed were we actually to try them.

We abandoned our ascent at the apex of the slope, as the glacier began to flatten out. In the fading afternoon light we sat in the snow, had ourselves some hot cordial, and basked in the glory of the peaks that still towered above us despite our day’s acheivements. It was cold, but this was what we had come for, and tomorrow was a new day. A day which would give us the run of this place for as much as we could physically stand it. The sooner we got to bed, the sooner we could be up and making turns somewhere up in the midst of this paradise. I clipped in to my AT bindings, Mackie into his teles, and we headed back to the hut.

They were our first turns of the trip, and the first pitch was dissapointing- a technical mix of wind-crust interspersed with chunky powder that had us staggering and lurching like a pair of winos, ever frightened of blowing a knee before we even had the chance to savour the fruits of our day’s labour. Then the slope-angle changed, and we rolled into knee-deep fresh on the last wall behind the hut and carved high-speed S-turns into the slope, whooping with joy, watching plumes of snow ride into the air in our wake. We raced eachother back to the hut, and on arriving, our faces were flushed with cold and excitement. The sun was gone, and it was time to eat. We bedded down that night and slept the sleep of the justified. Watching the stars shine through the enourmous windows of the A-frame bunkhouse, we allowed ourselves to forget that we were in the mountains and imagined that tomorrow would bright sun and blue skies, a perfect day for a perfect landscape.

How wrong we were…

2 comments on “Bow Hut or Bust”