Fish Soup (It’s Been a While) 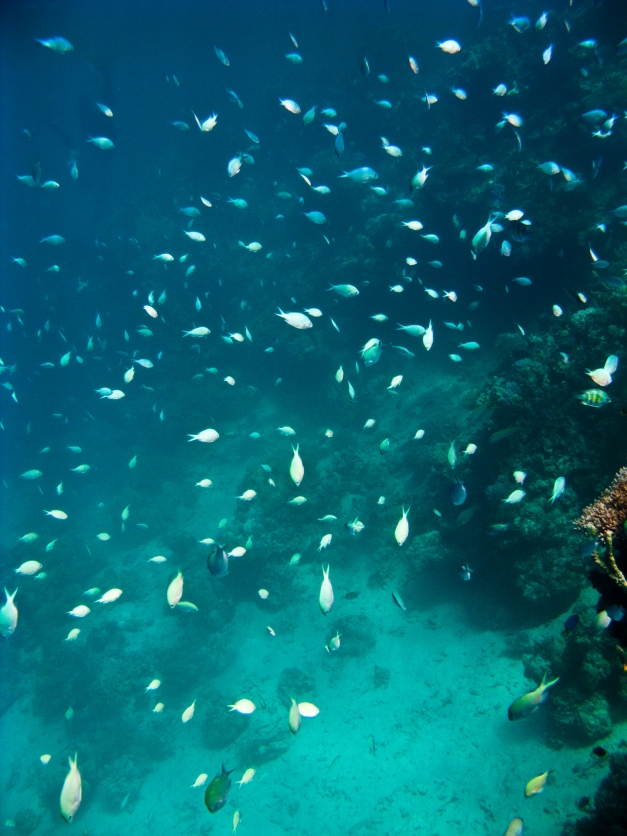 I’ve not really been underwater since leaving PNG, which was where I really developed a love for diving.  I also learned to be comfortable (mostly) in the water.  I’ve always been a good swimmer, but what lurks beneath the water, out of sight, has always scared me a little.  Not until I saw my first shark (a cute little black-tip) did I realise that the wildlife under the waves is overwhelmingly beautiful, and something to be cherished, not feared.

In Fiji I managed a couple of dives, and a good deal of snorkelling on one of the most spectacular beachside reefs I’ve ever had the joy of splashing across.  I re-acquainted myself with some old fishy friends (you’ve already seen my latest Anemonefish post- bless their stripey orange socks), as well as meet some new ones.

A little sampler below.

First off the mark is an old favourite.  This colour-strewn fellow is known, for painfully apparent reasons, as the Picasso Triggerfish.  He looks rather as if a box of crayons has vomited on him (similar things could be said about the work of his namesake, if you ask me).  As my old diving buddy Jan continuously points out, Triggerfish are notoriously territorial, and it’s well worth keep an eye on what they’re up to when you’re in their territory.  However the Picasso is not generally among the most aggressive species (at least in my experience).  They are, however, incredibly flighty, and I was very chuffed to be able to get this shot before he shimmied off among the coral branches.  I am always delighted to find one of these flitting around the reef, as they are visually stunning to look at.  One I’ve seen for years, but never fails to delight. 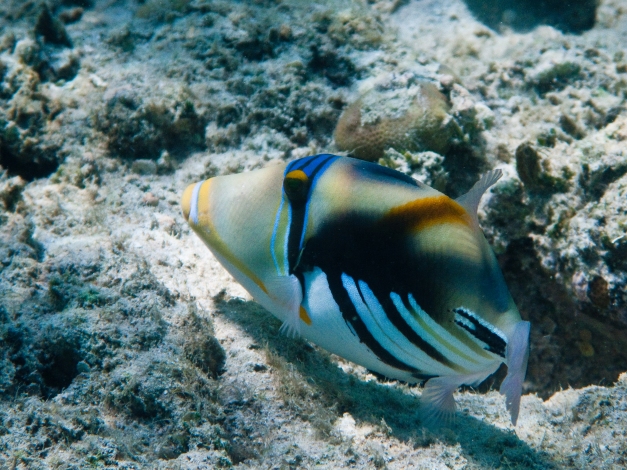 A bit of trivia, for those not in the know: The Picasso Triggerfish, and its similarly patterned cousin the Reef Triggerfish, together share the honour of being the State Fish of Hawaii.  In the native Hawaiian tongue, they share the polysyllabic but oh-so-delightful-to-recite name of Humuhumunukunukuapua’a (“triggerfish with the snout of a pig”).

This ethereal beauty is a species of Reef Squid (I have no idea which one).  I’ve seen squidlets around on dives before, but I’ve never seen this species, nor anything quite like its enchanting behaviour.  Nearly translucent in the water, they drift with an almost tangible silence, the fins that surround their body undulating to propel them forwards.  Or backwards.  I’m not actually sure which end is which. 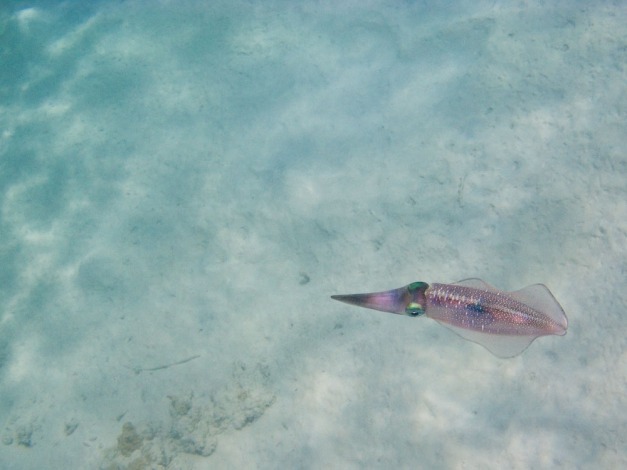 We came across them as they approached us in a curious line, almost like a flight of aircraft on a recce.  Again quick to flit off, eventually they came back for another curious gaze, and hovered in the water just below us.  On the third or forth occasion that they delighted us with a swim-past I managed to get a series of shots which I was very pleased with.  You can clearly see the delicate markings on the larger shot, while processing the other image for white balance and colour temperature revealed a pink-red hue that was quite unexpected but utterly wonderful.  One of the stranger wayfarers we stumbled upon on the reef, but certainly one of the more wonderful. 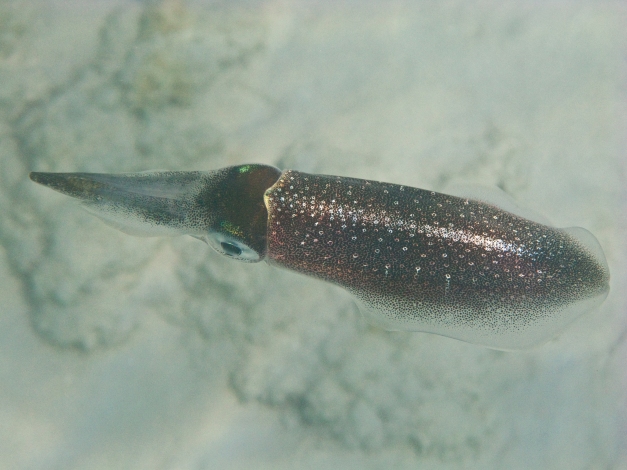 Next up, another tried and true favourite.  Known to Nemo fans as Scar, and regretfully voiced by Willem Dafoe, the Moorish Idol is commonplace to many tropical reefs- but is by no means common in appearance.  (For clarification, I have nothing against Dafoe- in fact, very much enjoy his on-screen presence; but his gravelly voice is far too sinister to represent such a gorgeous fish).  While the fish itself is seen often, many people don’t know its name, and assume it is a type of Bannerfish, or an Angelfish (justifiable because of its spectacular appearance, not because it bears any resemblance to the various species of Angelfish, which are markedly different).  The yellow-black-and-white patterns also resemble some species of Batfish, though on the latter- which is larger- the colours are far more muted. 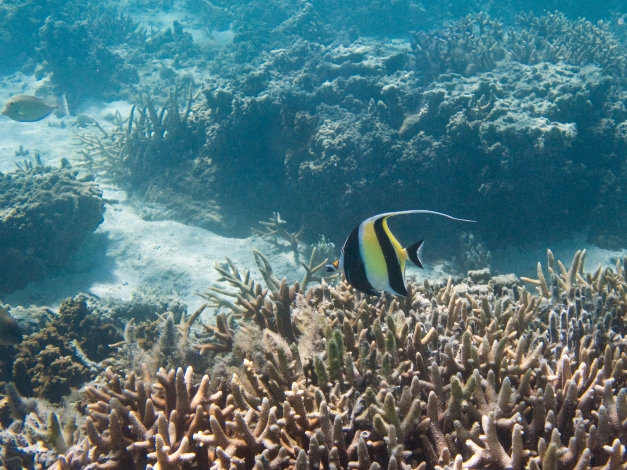 This photo isn’t about to win any awards, but like many other fish on the reef, the Idol doesn’t stay idle for long.

This is a Three-Stripe Damselfish (Dascyllus Aruanus).  I don’t have much to say about it, except that they’re very pretty. 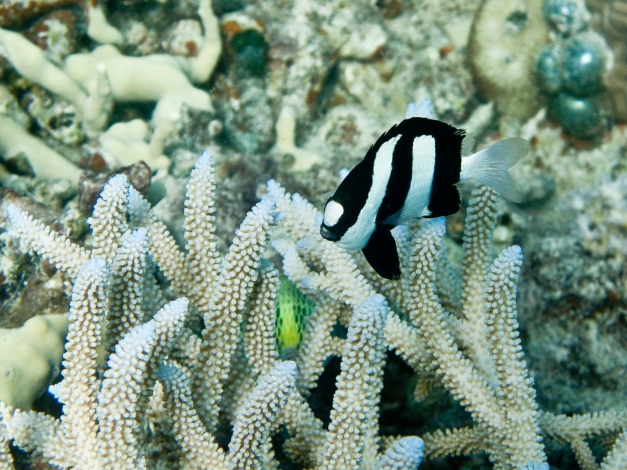 The Three-Stripe has a little cousin, the Reticulated Dascyllus.  These much tinier fish are often seen congregating around coral plates and outcrops, and have a terribly delicate appearance- very lovely to watch. 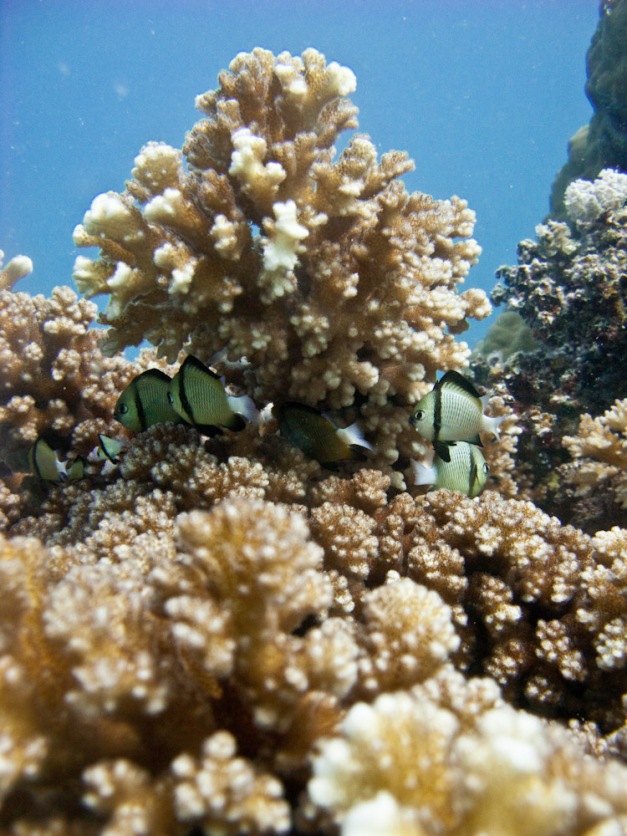 And this one is a Royal Angelfish.  REALLY pretty.  I like these ones.  🙂 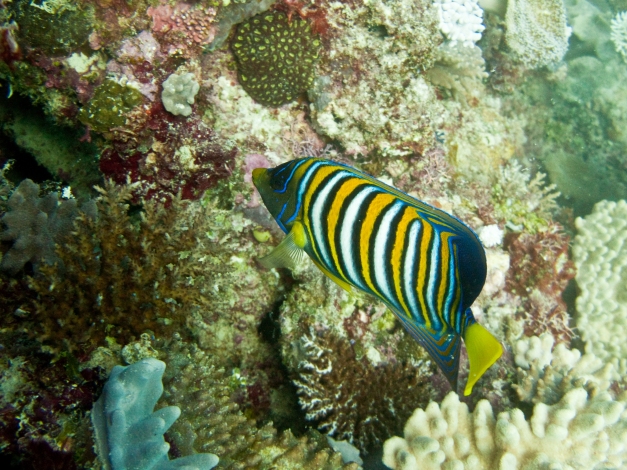 These next two shots are of another favourite, the Blue-Green Chromis.  Here they’re flitting among the branches of a coral thicket.  They’re beautiful fish- they swim in shimmering shoals near the surface of the water, darting down as one unit with a gleam of shining flanks that looks positively metallic (hence the name).  Out of direct sunlight, the strong colour of their scales really shows up.  They’re a delight to snorkel amongst, always hovering just beyond the tips of your fingers as you drift past. 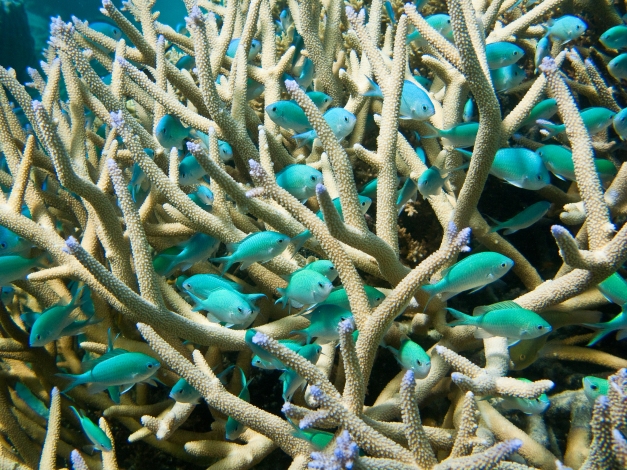 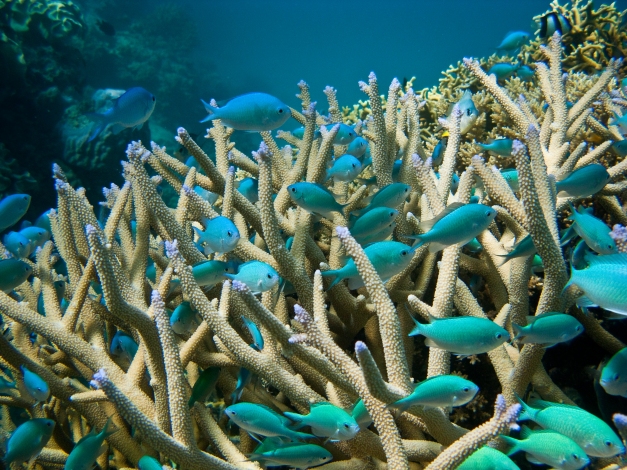 Another commoner- so common I don’t even know its name- is this stripey fellow.  I leave you with this one, and a cheeky little face-off from our regular guest here, the spunky Anemonefish. 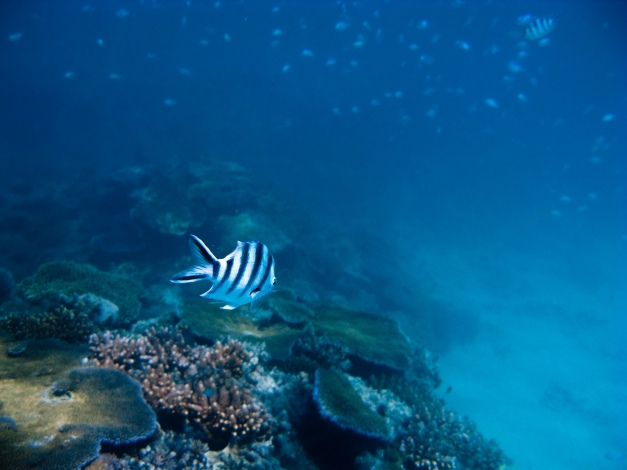 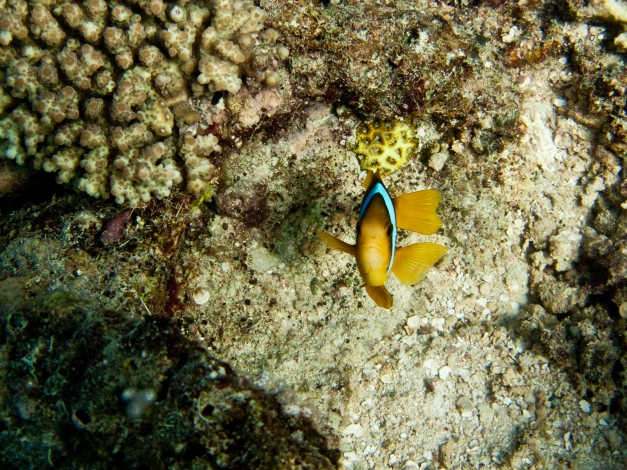 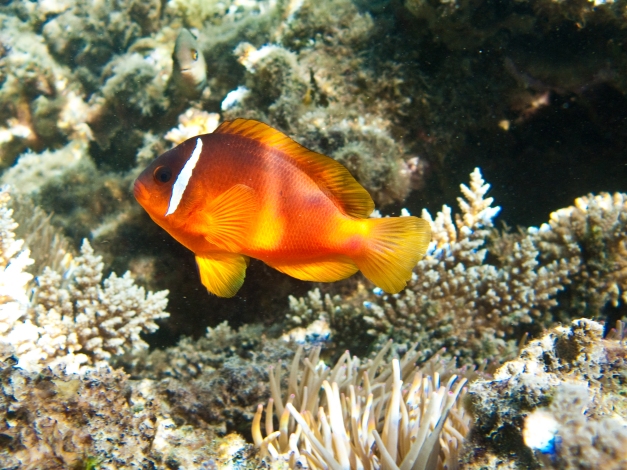 After an eighteen-month hiatus, I finally got back into the water in Fiji.  Or not so much into it, but under it.  And I got to take my camera (the Powershot G9, not, sadly, the 5D) swimming too.

The snorkelling along the beach was fantastic- probably the most beautiful beachside reef I’ve ever had the opportunity to explore (more on that presently).  However I did also get the chance to do a little diving as well.  A refresher dip, just so I could recall how to submerge myself without panicking/drowning/getting decompression illness.  Then a shark dive (way to ease yourself back into the hobby), replete with Grey, White-Tip and Black-Tip Reefers, Grey Nurses, and a couple of pretty bulky Lemon Sharks as well.  Awesome fun- but sadly, in my haste (and a tickle of nervousness as well) I accidentally left the camera on the boat.

I also did a dive with my fiancee.  It was her first, an explorer dive, which she very bravely accomplished with the instructor with just 15 minutes’ worth of briefing- something I never would have done.  But I managed to remember my camera this time, and took it along to document the fun, and explore the reef at the same time.

As I’ve mentioned before, anemonefish are great subjects, because unlike most fish, which scurry away the moment you home in on them like a cycloptic predator, anemonefish tend to stay put.  You know where to find them (check out your nearest anemone), and not only do they not swim away, they often charge at you, all teeth and tiny bouts of indignance.

This little reel is a set of six colourful shots I managed to snatch of one pair of such little critters.  The combination of bright colours, the exotic location, and the semi-translucent tentacles of the anemone itself, all make for fun viewing.  I hope you enjoy.

For the record, I suspect that the little fishies showcased here are all Cinnamon or Fire Anemonefish (Amphiprion Melanopus)- a little different from the Anemone Clownfish of Nemo fame which most people are familiar with.  I have no idea what the anemones are (there are at least two species shown here). 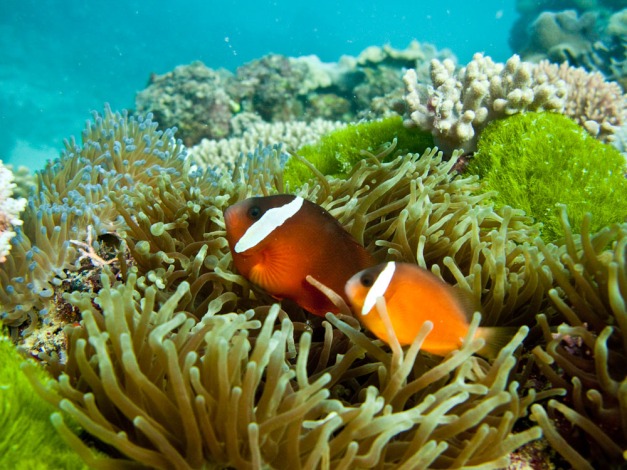 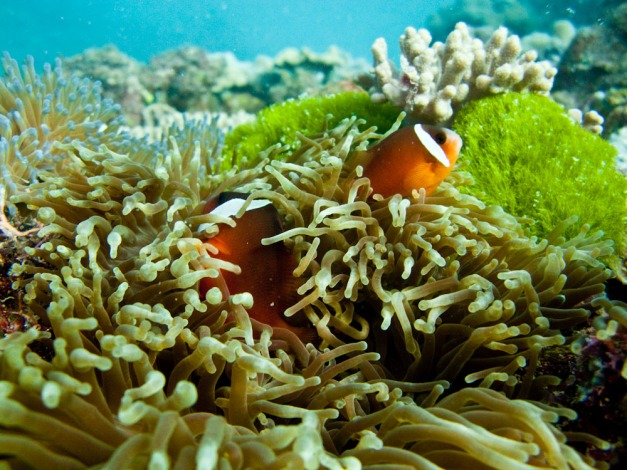 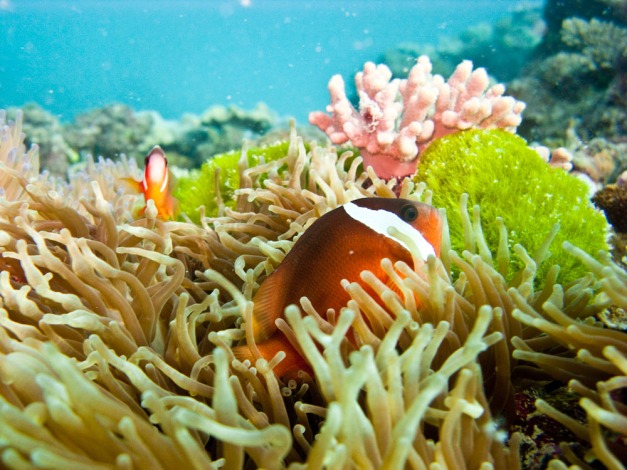 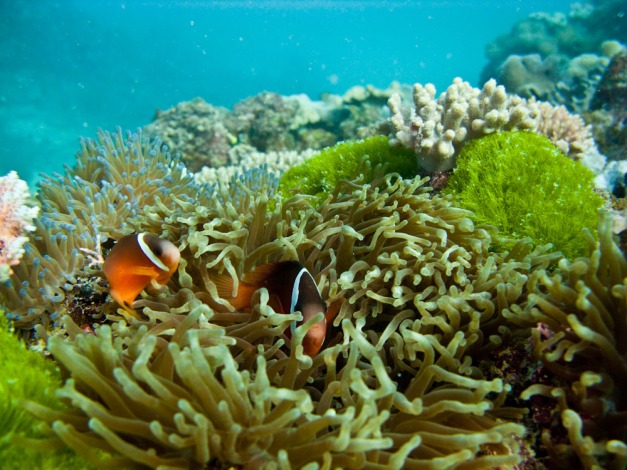 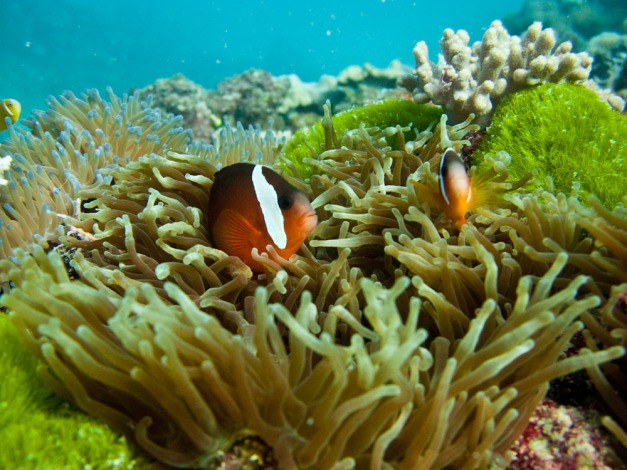 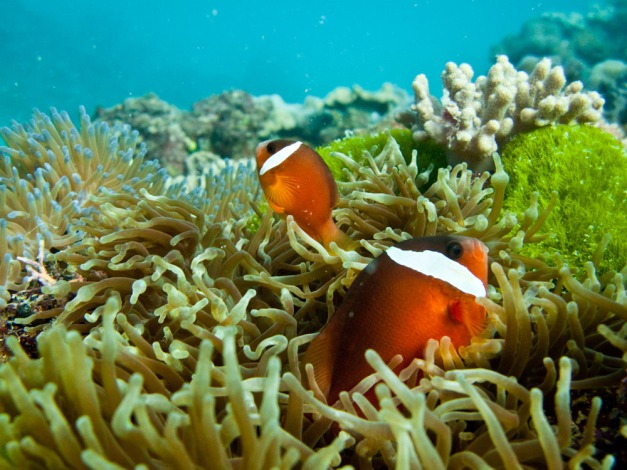 More Fiji shots- above and below water- to come. 🙂